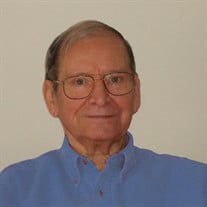 After a long battle with Parkinson’s Disease, Allison Michael Bradbury went home to be with his Lord on November 26, 2019 at 87 years of age. He was surrounded by his loving family. He was a beloved and devoted husband, father, grandfather and great-grandfather. Al was born in Middleport, PA to Allison J. and Anna (Bobal) Bradbury on September 21, 1932. He met the love of his life, Ellen L. Sherman at Allentown High School and graduated in 1950. They were married on May 23, 1953 and celebrated their 66th Wedding Anniversary this year. They had three children, Cheryl, Mark and Anne. Al began his career in surveying at Mast Engineering, Inc. and later became the Allentown Branch Manager for A.W. Martin, Inc. In 1980, he formed Martin, Bradbury & Griffith, Inc. with his partners Abraham W. Martin and John Griffith. He later became sole owner of this company. For many years, Al was an active member of the Pennsylvania Society of Land Surveyors (PSLS). He served as president of the Reading Chapter of PSLS and aided in the formation of the Lehigh Valley of PSLS. In 2004, Al was honored as the Surveyor of the Year for Pennsylvania. During his lifetime, Al was active in the Parkway Manor Lion’s Club where he also served as president. In addition, he was a Freemason and belonged to Greenleaf Lodge #561. Throughout his life, he held an unwavering faith in God, which he shared with his wife. He had been an active member at Calvary Moravian Church in Allentown for many years, serving as a Trustee and performing many other duties. Recently, he belonged to the First Baptist Church in Allentown. Al enjoyed working on cars and boats; and family time at Lake Wallenpaupack. In his leisure time, he loved family dinners and activities, going out with friends and traveling the world. Al joins his parents; sister, Marianne Albright; and daughter, Anne Elizabeth in Heaven. He is survived by his wife, Ellen; daughter Cheryl L. Demers, wife of Chris W. Demers; son, Mark A, Bradbury and wife Debora A Bradbury; grandchildren: Dr. Elizabeth A. Demers Lavelle, wife of Dr. William F. Lavelle; Andrew W. Demers; and Ryan A. Bradbury. His great-grandsons are W. Jacob, Tyler and Conor Lavelle who loved him dearly. A Funeral Service will be held on Tuesday, December 3, 2019 at 10:30 A.M. in the First Baptist Church Allentown, 1808 N. 19th St. Allentown. Call Tuesday, from 9:30 A.M. to 10:30 A.M. at the Church. Arrangements by the J.S. Burkholder Funeral Home, Allentown. Condolences may be recorded and further information found at www.jsburkholder.com. In lieu of flowers, donations may be sent to: The Michael J. Fox Foundation for Parkinson Research, P.O. Box 5014, Hagerstown, MD 21741-5014 (1-800-708-7644) or First Baptist Church, 1808 N. 19th St., Allentown, PA 18104.

After a long battle with Parkinson&#8217;s Disease, Allison Michael Bradbury went home to be with his Lord on November 26, 2019 at 87 years of age. He was surrounded by his loving family. He was a beloved and devoted husband, father, grandfather... View Obituary & Service Information

The family of Allison Michael Bradbury created this Life Tributes page to make it easy to share your memories.

After a long battle with Parkinson’s Disease, Allison Michael...

Send flowers to the Bradbury family.