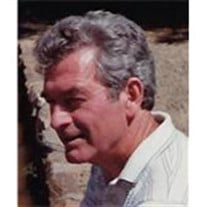 Andrew J. O'Donnell, 94, of Allentown, died at Lehigh Valley Hospital on April 22, 2019, with his two daughters at his side. He was the husband of the late Helen J. (Talarovich) O'Donnell. Born in Freeland, PA, on March 10, 1925, he was the youngest child of Andrew F. and Elizabeth (Campbell) O'Donnell. After graduation in June 1943 from St. Ann's High School, Freeland, he was drafted into the U.S. Army. A decorated World War II veteran, he was a member of the 38th Cavalry Reconnaissance Squadron serving in the European Theatre. He landed on Omaha Beach on June 12, 1944, when he was just nineteen years old, participated in the Battle of the Bulge, received five battle stars, and was awarded the Purple Heart. His unit was the first of the American soldiers to march down the Champs-Elysees the day Paris was liberated. After the war ended he enrolled at Loyola College in Baltimore, earning a basketball scholarship. He was a member of many campus organizations, among them Alpha Sigma Nu, the Jesuit National Honor Society. He was inducted into the Hall of Fame at Loyola in 1994, for his achievements on the basketball court. The Baltimore Bullets of the NBA signed Andy after college, where he played before moving on to several Professional Eastern League teams. He began a career with the Social Security Administration which spanned over 30 years, receiving the Commissioner's Citation for exemplary service in 1979. After retiring, he practiced real estate in the Lehigh Valley for many years. Tennis was also one of his passions, playing in college and at Oakmont Tennis Club for years thereafter. He won many club championships and also various City tournaments. He opened the first local indoor tennis courts at Agricultural Hall in Allentown in the 70's. Always the competitor, he studied and excelled at ballroom dancing in his later years, was a published poet, and an expert calligrapher. He was formerly a member of Cathedral of St. Catharine of Siena and a current member of St. Thomas More Church. He was predeceased by his brother John E. O'Donnell and his sister Elizabeth A. Johnson, and two sisters who died as young children before his birth. Andy lived a life full of faith, family, laughter, and adventure. He was proud of his Irish heritage and the closeness he shared with his immediate and extended family. He loved telling a good joke and shared many unforgettable stories from his lifetime. As he was once told in New York City, he was - credit to the Irish race-. Survivors: Daughters, Patricia E., wife of Gene Nosovitch, and Sheila E. O'Donnell, wife of Dennis McCarthy, all of Allentown; grandchildren Colleen, Brendan, and Jack Nosovitch; nephews Robert (Kathleen) Johnson, Jack (Midge) Johnson, Kevin (Laura) Johnson, and Brian (Kate) Johnson; nieces Catherine Lieberman, Sheila Johnson, Marian Johnson, Nancy (John) Ashley, and Eileen Johnson. Services: Funeral Mass 11:00 A.M. Friday, April 26 at St. Thomas More Catholic Church, 1040 Flexer Avenue, Allentown. Call 9-11 A.M. Friday in the church. Arrangements by J.S. Burkholder Funeral Home, Allentown.

Andrew J. O'Donnell, 94, of Allentown, died at Lehigh Valley Hospital on April 22, 2019, with his two daughters at his side. He was the husband of the late Helen J. (Talarovich) O'Donnell. Born in Freeland, PA, on March 10, 1925, he was the... View Obituary & Service Information

The family of Andrew J. O'Donnell created this Life Tributes page to make it easy to share your memories.

Send flowers to the O'Donnell family.