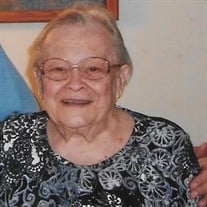 Ann Maury, 98, of Allentown, formerly of Waverly, NY died October 21, 2021 in Mosser Nursing Home, Trexlertown. She was the wife of Richard H. Maury. They were married for 77 years last December. Born in Allentown, she was the daughter of the late Charles H. and Lillian E. (Hensinger) Nagle. After graduation from Allentown High School in 1939, Ann worked in the office and was an operator at Bell Telephone prior to her marriage. When the family moved to New York, she managed the office of the American Red Cross in Waverly. When the family moved back to Allentown, she volunteered at the American Red Cross and was a receptionist at Phoebe Terrace for several years. She was a member of the former Hope United Church of Christ and a member of the former Salem United Church of Christ where she sang on the choir, taught Sunday school and served as a Girl Scout leader. She was also a former member of the Valley United Presbyterian Church, Waverly where she taught Sunday school and sang on the choir. Survivors: Husband; daughter, Vicki J. wife of Ronald W. Moyer of Germansville; sons, Brett A. Maury and his wife Lydia of Hayward, CA, Kevin R. Maury and his wife Marisa of Shaker Heights, OH; sister, Phyllis Rau of Bethlehem; brother, Robert Nagle of New Tripoli; 8 grandchildren; 16 great-grandchildren; 5 great great-grandchildren. Ann was predeceased by her daughter, Wendy Marie Maury and her son, Craig H. Maury. A funeral service will be held on Tuesday at 11:00 A.M. in the J.S. Burkholder Funeral Home, 16th & Hamilton Sts., Allentown. A calling hour will be held on Tuesday, from 10 A.M. to 11 A.M. in the funeral home. In lieu of flowers, memorial contributions may be made in Ann’s memory to the American Red Cross, 3939 Broadway, Allentown, PA 18104 or to Mosser Nursing Home, 1175 Mosser Road Trexlertown, PA 18087

Ann Maury, 98, of Allentown, formerly of Waverly, NY died October 21, 2021 in Mosser Nursing Home, Trexlertown. She was the wife of Richard H. Maury. They were married for 77 years last December. Born in Allentown, she was the daughter of... View Obituary & Service Information

The family of Ann Maury created this Life Tributes page to make it easy to share your memories.

Send flowers to the Maury family.