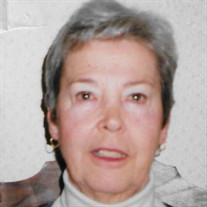 Ann L. (Shaak) Willgruber, 95, formerly of Allentown, died December 31, 2021 in Whitehall Manor. She was the wife of Bernard J. Willgruber. They celebrated their 72nd wedding anniversary on April 16, 2021. Born in Souderton, she was the daughter of the late Paul W. Shaak, Sr. and Iva (Wismer) Shaak. A 1944 graduate of Allentown High School, she attended Philadelphia Community College and received her Business Certificate in 1983. Ann began her working career as a radio teletype operator in 1946 at American Airlines, La Guardia Airport, Jackson Heights, NY. From 1948 until 1951, she was an ad taker and teletype setter for the former Call Chronicle, Allentown. In 1966, she took a position as an advertising sales representative with the former Philadelphia Evening Bulletin until her retirement in 1981. Ann was also a driver and helped where needed at the Catholic Social Agency, Allentown for several years. She was a member of St. Thomas More Catholic Church, Allentown where she sang on the choir from 1986 until 2013 and participated in hospital visitations. She was a volunteer in the Pastoral Care Department at Lehigh Valley Hospital, Salisbury Twp. for 20 years. Always active, she enjoyed swimming, dancing, bridge and skiing having been a member of several ski clubs and the Allentown Bridge 2nd Tuesday Group. She was a devoted wife, mother and grandmother. Survivors: Husband; children, James Willgruber husband of Toni Jean of Philadelphia, Michael Willgruber of King of Prussia, Richard Willgruber husband of Nanette of King of Prussia, Andrew Willgruber husband of Briana of Palmyra, VA, Maryann wife of Joe Kusterer of Manassas, VA, David Willgruber husband of Marilyn Rucci of Whitehall, John Willgruber husband of Theresa of Devon, PA; 13 grandchildren; 4 great-grandchildren; niece, Melissa Shaak and a nephew, Stephen Shaak. She was predeceased by a grandson, James David Willgruber, her brother, Paul W. Shaak, Jr., sister-in-law, Mary Shaak and daughter-in-law, Joan Willgruber. A Mass of Christian Burial will be held on Friday, January 7, 2022 at 10:30 A.M. in St. Thomas More Catholic Church, 1040 Flexer Ave., Allentown. A calling hour will be held on Friday, January 7, 2021 from 9:30 A.M. to 10:30 A.M. in the church. Arrangements by J.S. Burkholder Funeral Home, Allentown, In lieu of flowers contributions may be made in Ann’s memory to the charity of your choice.

Ann L. (Shaak) Willgruber, 95, formerly of Allentown, died December 31, 2021 in Whitehall Manor. She was the wife of Bernard J. Willgruber. They celebrated their 72nd wedding anniversary on April 16, 2021. Born in Souderton, she was the... View Obituary & Service Information

The family of Ann L. Willgruber created this Life Tributes page to make it easy to share your memories.

Send flowers to the Willgruber family.