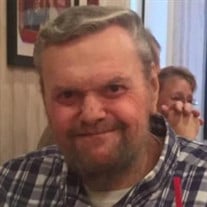 Bernard M. “Gee” Gianotti, 78, of Saylorsburg, passed away August 6, 2019. He was the husband of Barbara T. (Bailey) Gianotti. They were married for 54 years in February. Bernard was a truck driver for Carolina Freight, now ABF in Pinebrook, NJ, for 35 years until retiring in 2003. Born in Jersey City, NJ, he was the son of the late Bernard M. Genett and Mary (Hewett) Caraccio. He was the Step-Son of the late Paul Caraccio. He was a member of the Teamsters Local # 560 in Union City, NJ. He was a member of St. Elizabeth of Hungary Catholic Church, Pen Argyl, PA. Survivors: Wife, Daughters: Maria T. wife of David J. Rogers of East Stroudsburg, PA and Lisa A. wife of Matthew G. Brand of Allentown, PA Son: Anthony M. Gianotti and his wife Karen of Brodheadsville, PA, Brothers: William Gianotti and his wife Terry of Toms River, NJ, Andrew Genett and his wife Angela of Glen Rock, NJ, Stephen Genett of Monroe, NY, Sisters: Maureen wife of Robert Avrach of Wayne, NJ and Suzanne wife of Anthony Martino of Sugarloaf, NY and Grandchildren: Brian Gianotti, Matthew Brand, Bailey Brand, Sophie Rogers, Rebecca Gianotti and Shawn Lesoine. He was preceded in death by a Brother: Donald Gianotti and a Great-Grandson: Micah V. Gianotti. A Funeral service will be held on Friday at 10:30 A.M. in the J.S. Burkholder Funeral Home, 16th and Hamilton Sts., Allentown. Viewing hours will be held on Thursday from 5 P.M. to 8 P.M. and on Friday, from 9:30 A.M. to 10:30 A.M. at the funeral home. Contributions may be made in his memory to St. Jude Children’s Research Hospital, 501 St. Jude Place, Memphis, TN 38105.

Bernard M. &#8220;Gee&#8221; Gianotti, 78, of Saylorsburg, passed away August 6, 2019. He was the husband of Barbara T. (Bailey) Gianotti. They were married for 54 years in February. Bernard was a truck driver for Carolina Freight, now ABF... View Obituary & Service Information

The family of Bernard M. "Gee" Gianotti created this Life Tributes page to make it easy to share your memories.

Send flowers to the Gianotti family.