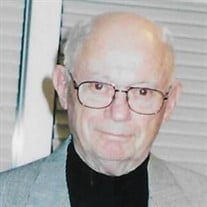 Bernard Weiner 103, of Delray Beach, FL, formerly of Allentown, PA, loving father, grandfather, and great-grandfather, passed away on July 12, 2021. He was born on August 25, 1917, in New York, son of Rubin and Esther (Steinberg) Wiener. Bernie was a partner at the Lehigh Valley Industrial Building Co., president of the Anchor Building Supply Co. and the Queen City Construction Corp. until his retirement in 1982. Building residential, commercial and industrial buildings, including Hess’s suburban stores, where his joy in going to work every day. He was a long-standing board member of Keneseth Israel and well known and respected in his community for his subtle humor and offer of help amongst friends. Bernie served on the Keneseth Israel Cemetery Association. He was consulted in the construction of buildings at the Betty and Joseph Harlam Camp in the Poconos, House Chairman for the Whitehall Chamber of Commerce, President of the Whitehall Kiwanis Club, and a member of the Middle Atlantic Lumberman’s Association. He served the Navy during World War II. Bernie married Anne Lansman in 1941 and they had two daughters. He is predeceased by his wife, Anne Wiener and his daughter, Susan Teger. Bernie was an avid reader and enjoyed playing duplicate bridge his entire life. While Bernie lived in Allentown, he was a long-standing member of “The Wiseguys”. The men met every month to settle the problems of the world and enjoy the evening’s delicacies. In addition, he and his fellows met a Muhlenberg College for breakfast and serious discussions of various topics. Very often the faculty would join in with the group. In 1997, he married Shirlee Schentzel of Allentown. They spent their winters in sunny Florida and decided to become full time residents in 2006. He served as Maintenance Chairman of their Townhouse Association, enjoyed the exercise and social activities of the pool and community in addition to working out with his personal trainer twice a week. He is survived by his wife, Shirlee Wiener, daughter, Roberta Wiener (Jim Arnold), Daryl Zampieron (Alex), son, Seith Schentzel (Patricia), daughters, Roann Markel (Greg), Stacy Lewis (Ed), brother, Sidney Mahler, grandsons, Carl Teger (Angel), Jeffrey Zampieron (Rina), Gabriel Lewis, Benjamin Lewis, granddaughters, Steffanie Gould (Josh), Jennifer Zampieron, Arianna Markel, Andrea Lewis, Shoshana Markel, great-granddaughters, Ruby Teger, Rivka Zampieron and Ziva Zampieron. Interment will be private, at the convenience of the family. Guest may attend a Shiva Service will be held on Thursday, July 15, 2021 at 7 P.M. in the home of Dr. and Mrs. Seith Schentzel 1007 Newgate Drive Allentown, PA 18103 and the family will also receive visitors at the Schentzel home on Friday, July 16 from 1 P.M. to 3 P.M. and on Saturday, July 17 from 1 P.M. to 3 P.M. Contributions can be made to: Congregation Keneseth Israel 2227 W. Chew Street Allentown, PA 18104 or JCC of the Lehigh Valley 702 N. 22nd Street Allentown, PA 18104

The family of Bernard Wiener created this Life Tributes page to make it easy to share your memories.

Send flowers to the Wiener family.