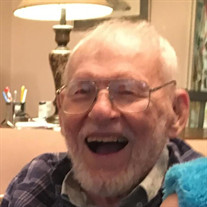 Charles W. “Lefty” Marsh, Jr., 92, of Allentown, passed away on May 4, 2022 at home. He was the devoted husband of Jeanne E. Marsh nee Evans, for 55 years until her death in 2014. Born and raised in Allentown, he was the son of the late Charles W. Marsh (1904-1971) and Annie Mae (Missbach) Marsh (1910-1999). Charles became an avid baseball fan after his dad took him to a Major League game in 1938. He graduated from Allen High School in 1948. During the Korean Conflict he served as a corporal, running a warehouse on the port of Pusan, South Korea in 1953. He graduated from Lehigh University in 1960 with honors and a degree in accounting. He worked for the Bethlehem Steel Corporation from 1960, for 32 years, in their data processing section. As a member of Calvary Baptist Church, in Allentown, he served as treasurer from 1965-1972. Charles was inducted into the Voters Hall of Fame by the Pennsylvania Department of State, honoring him for 50 consecutive years of participation in general elections. A loving son, husband, father, grandfather, great-grandfather and friend, he is loved dearly and will be sorely missed. He is survived by his son, Andrew M., his daughters AnneMarie Lewis and her husband Robert Lewis and Julia E. Marsh, all of Allentown; three grandchildren, Daniel Lewis, Brian Lewis, and Michele Lewis; and eight great-grandchildren. Services: Funeral services will be held on Thursday at 10:30 A.M. in the J. S. Burkholder Funeral Home, 16th and Hamilton Streets., Allentown. A calling hour will be held on Thursday, from 9:30 A.M. to 10:30 A.M. in the funeral home. Condolences may be offered at: www.jsburkholder.com

The family of Charles W. "Lefty" Marsh Jr. created this Life Tributes page to make it easy to share your memories.

Send flowers to the Marsh family.