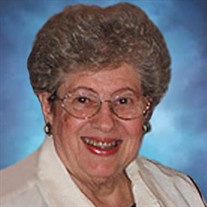 On May 30, 2022, Dorothy “Dottie” Kraemer of Bethlehem passed peacefully at the age of 92. She was a devoted mother, grandmother and great-grandmother. Born in Allentown to Samuel and Clara (Davis) Marsden, she was a 1947 graduate of Allentown High School, and remained a lifetime resident of the Lehigh Valley. During WWII, Dottie volunteered with Navy Club U.S.A. of Allentown, and promoted Anchor Day to support the troops. She was introduced to her future husband, Frank “Bud” Kraemer, by his brother, Paul. Frank and Dottie married on May 1, 1948. She worked at Sears, Roebuck and Co. for over 30 years in the auditing department and formed lifelong relationships with her coworkers. Dottie will be remembered for her fellowship with the Peanut Makers at church, her time spent playing boomba in the Kitchen Band, her multiple Halloween costumes, gatherings with fellow Sears retirees, and attendance at her high school class reunions. Dottie relished her weekly outings to the Mid-County Senior Center, and the many friendships formed there. She loved keeping in contact with friends, family, and her pen pal, whether via phone, cards, or letters. She kept herself busy with cryptoquotes, puzzles, playing Kizmet with her grandkids, enjoying music, going to movies, and watching game shows on TV. She very much-loved traveling when she was able, attending musicals, and visiting several states, plus Iceland and Canada. Predeceased by her husband, infant daughter Lori Jeanne Kraemer, son-in-law George Goshert, son-in-law Roland Bealer, and half-brother Robert Marsden. She will be sadly missed by two daughters, Gail Goshert of Eugene, OR, Karen Bealer of Bethlehem; and one son, Ross Kraemer (Traci) of Deer Creek, IL. Dear grandmother of: Bryan Goshert (Yin-Yin), Jason Goshert (Elissa), Audra Bittner (Scott), Brett Bealer (Heather), Christopher Kraemer, and Nicholas Kraemer. Great-grandmother to Elizabeth, Sophie, Maxwell, Abigail, and Henry. Arrangements entrusted to J.S. Burkholder Funeral Home, 1601 Hamilton Street, Allentown. Visitation will be held on Saturday, from 10 A.M. to 11 A.m. at the funeral home. Her funeral will be held on Saturday at 11 A.M. with interment at Garden of Peace Cemetery, Whitehall, PA. In lieu of flowers, contributions made to Bethany United Church of Christ 600 Market Street Bethlehem, PA 18018 Bethlehem or to the Lower Nazareth Senior Community Center 306 Butztown Road Bethlehem, PA 18020

On May 30, 2022, Dorothy &#8220;Dottie&#8221; Kraemer of Bethlehem passed peacefully at the age of 92. She was a devoted mother, grandmother and great-grandmother. Born in Allentown to Samuel and Clara (Davis) Marsden, she was a 1947 graduate... View Obituary & Service Information

The family of Dorothy C. Kraemer created this Life Tributes page to make it easy to share your memories.

Send flowers to the Kraemer family.