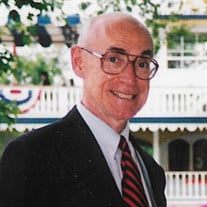 Dr. John P. Galgon, 87, of Allentown, PA, died on November 30, surrounded by his loving family. Dr. Galgon was married for 42 years to the love of his life, Catherine (Tiernan) Galgon, who died of pancreatic cancer in 2007. They are survived by (with spouses) their children: Sean (and Lynn), Mike, Cathy, Dave (and Heather), Chris (and Emily), and Brian; and their 13 grandchildren: Edel, Riley, Libby, Daisy, Maria, John, Bryce, Jack, Stella, Ruby, James, Julia, and Joelle. Dr. Galgon is also survived by his sisters, Julie Hall, of Georgia, and Darlene Weiser, of Oklahoma. Dr. Galgon, a pulmonologist for 51 years, brought two significant innovations – critical care and sleep medicine -- to the Lehigh Valley. Galgon completed his residency in pulmonary care in the mid-1960s, just as researchers at Mass General in Boston, MA had developed the ability to precisely measure the level of oxygen in a patient’s blood; this further indicated how much oxygen they required from a ventilator to maintain proper function. Galgon recognized the significance of this innovation and sought training with early pioneers in Massachusetts and Michigan. Armed with this new and critical expertise, he helped found the first critical care centers of their kind in Philadelphia and Allentown, introducing the modern use of ventilators, with which many lives were saved. With John Kibelstis and Joe Vincent, he launched Pulmonary Associates at this time, which became the leading pulmonary group in the Lehigh Valley. Any patient who has needed a ventilator in the intensive care unit in eastern PA, therefore, has benefitted from his work. In the mid-1980s, he observed that most sleep disorders were rooted in pulmonary issues and sought training with leaders in the emerging field of pulmonary sleep medicine, which treated sleep issues with the C-Pap machine amongst other approaches. As he had with the innovation in blood-oxygen measurement, Galgon brought this innovation to the Lehigh Valley and launched the Lehigh Valley Sleep Disorders Clinic, the first in the Lehigh Valley and one of the first in Pennsylvania. The sleep lab grew into one of the top-rated sleep labs in the country in the early 2000s and has remained one of the most significant of its kind. Born in 1934 in Cementon, PA, as the sixth of seven children, to Edward C. Galgon and Julia (Fodor) Galgon, Galgon learned the essential significance of family love and support, diligence and hard work, and a tireless energy to make things better. His father, Edward, fixed looms in Allentown throughout the depression, walking seven miles to and from work each day. His older brothers, Edward and William, fought in World War II and Korea, bringing home a worldliness and sense of new possibilities to Cementon and to Galgon. Galgon credited his mother, Julia, who was born in Hungary in 1896 and immigrated to the United States around 1914, for insisting on their diligence and commitment to education. Galgon paid his way through Moravian College with scholarships and his work at the cement plant, and then through Jefferson Medical School in Philadelphia, from which he graduated in 1960. After graduation, he served two years as a physician in the US Air Force in Japan. He returned to complete his internship in internal medicine at the VA Hospital in Philadelphia, and then teach medical students and perform research in the pulmonary lab at the University of Michigan. He subsequently returned to Allentown where he began private practice and service as Chief of Pulmonary Services and director of the Pulmonary Lab. This also launched his pioneering work in critical care and sleep medicine. He retired in 2012 at the age of 78, after 51 years of caring for his patients. Despite the demands of medicine and caring for his patients, Galgon reserved his most fervent love and care for his wife, Catherine, and his six children, for whom he was mentor, role model, wise counselor, and friend. This love proved most manifest in his care for his youngest son, Brian, who has Down’s Syndrome. Galgon’s achievement and intellect met their complement in Brian’s loving acceptance and humor; together, they spent Galgon’s final years exploring the Valley – and road-tripping to the Poconos -- and bringing smiles to many. His energy, curiosity, and zest for life showed also throughout his life as a skier, tennis player, golfer, outstanding tenor in the St. Thomas More Parish choir, and tireless reader. He never stopped learning or aspiring. Dr. Galgon lived his final years at Country Meadows in Allentown and Bethlehem, where he enjoyed expert and compassionate care and friendship. Services will be held at St. Thomas More Parish on Saturday, December 4 at 10:30am, with a viewing beginning at 9:30am. In lieu of flowers, please consider a donation to the Cay Galgon Life House in Bethlehem, PA, or the Mercy School For Special Learning in Allentown, PA.

Dr. John P. Galgon, 87, of Allentown, PA, died on November 30, surrounded by his loving family. Dr. Galgon was married for 42 years to the love of his life, Catherine (Tiernan) Galgon, who died of pancreatic cancer in 2007. They are survived... View Obituary & Service Information

The family of Dr. John P. Galgon created this Life Tributes page to make it easy to share your memories.

Send flowers to the Galgon family.