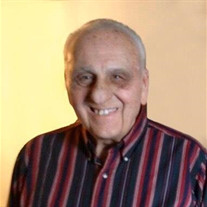 Fred E. Peifley, 91, of Allentown passed away on January 13, 2020 in St. Luke’s Hospital, Allentown. He was the husband of the late Geraldine L. (Neikam) Peifley. Born in Allentown, he was the son of the late Fred E. and Edna M. (Henry) Peifley. A 1947 graduate of Allentown High School, he was a member of the football and baseball teams. Fred continued his education at Muhlenberg College receiving a Bachelor of Arts Degree in 1951. While at Muhlenberg College he participated on the football team. He received his Masters of Education from Temple University in 1956. A counselor at Freedom High School, Bethlehem School District, Fred retired in the 1980’s after 25 years of service. He also served as a school psychologist and held supervisory positions within the district over the years. Previously he was a teacher and counselor in the Phoenixville School District and had coached the Junior High basketball team. Fred was a PIAA official in baseball, basketball and football serving in Chester and Montgomery Counties. Fred was a Marine Corps Veteran of the Korean War. He was a member, former council member and usher at the former St. Stephen’s Lutheran Church, Allentown and a member and usher at the former Seibert Evangelical Congregational Church, Allentown. Fred was a member of the Lehigh County Historical Society and the Pennsylvania German Cultural Heritage Society. Survivors: Daughter, Leigh Ann wife of Richard Konapelsky of Columbia, MD, Sons, David S. Peifley of Allentown and Christopher A. Peifley of Florida; 5 grandchildren; 6 great-grandchildren. A memorial Service will be held on Tuesday, January 21, 2020 at 2 P.M. in the J.S. Burkholder Funeral Home, 16th & Hamilton Sts., Allentown. A calling hour will be held on Tuesday, from 1 P.M. to 2 P.M. in the funeral home. In lieu of flowers, contributions may be made in his memory to the Alzheimer’s Association 399 Market St. Suite 102, Philadelphia, PA 19106

Fred E. Peifley, 91, of Allentown passed away on January 13, 2020 in St. Luke&#8217;s Hospital, Allentown. He was the husband of the late Geraldine L. (Neikam) Peifley. Born in Allentown, he was the son of the late Fred E. and Edna M. (Henry)... View Obituary & Service Information

The family of Fred E. Peifley created this Life Tributes page to make it easy to share your memories.

Send flowers to the Peifley family.