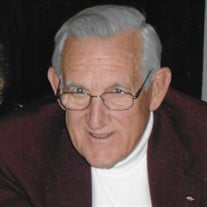 George Willis Hersh III, 86, of South Whitehall Twp., passed away March 27, 2022 in the Lehigh Valley Hospital, Salisbury Twp. He was the loving husband of Elaine R. (Levy) Hersh. They were married for 63 years last November. George was the former President and CEO of Lehigh Engineering from 1958 until 1977, Damper Design, Inc. from 1978 until 1988 and Jordan Enterprises (Jordan Lanes), until retiring. After retirement, he drove for various companies for 25 years. Born in Allentown, he was the son of the late George W. Hersh, Jr. and the late Clara C. (Smale) Hersh. George was a graduate of Allentown High School Class of 1953 and Muhlenberg College Class of 1957. While at Allen High School, George was a member of the Swim Team. He was a lifetime member of Christ Lutheran Church, Allentown, a 32nd Degree Mason at Greenleaf Lodge No. 361 and a former President of the South Whitehall Lions Club. George was an honorary member of Brookside Country Club for 54 years where he enjoyed playing golf and cards with his friends. During his time at Brookside, he hit two holes-in-one. He enjoyed sailing on the Sassafras River and the Chesapeake Bay, where he owned and captained “Buddy’s Boat II”. Survivors: Wife, Elaine R. Hersh, Daughters: Kathy Hersh Butz (Butch Strohl) and Linda Hersh Murphy, Son: George W. (Buddy) Hersh IV, Brother: D. Richard Hersh (Kathryn J.), Grandchildren: Michael Murphy (Ariana) and Brian Murphy (Taylor), his extended family and his Dog: Molly. A Memorial Service will be held on Friday, April 1, 2022 at 11 A.M. in the J.S. Burkholder Funeral Home, 16th and Hamilton Sts. Allentown. A calling hour will be held on Friday, from 10 A.M. to 11 A.M. in the funeral home. In lieu of flowers, donations may be sent in honor of George Hersh to: Twin Pines Camp, 3000 Twin Pines Road Stroudsburg, PA 18360.

George Willis Hersh III, 86, of South Whitehall Twp., passed away March 27, 2022 in the Lehigh Valley Hospital, Salisbury Twp. He was the loving husband of Elaine R. (Levy) Hersh. They were married for 63 years last November. George was the... View Obituary & Service Information

The family of George Willis Hersh III created this Life Tributes page to make it easy to share your memories.

Send flowers to the Hersh family.