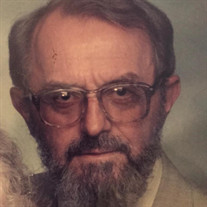 Rev. George H. Yoder, 96, of Allentown, PA, died June 1, 2020 in Phoebe Home. Married to the late Vivian H. Yoder for 66 years, he was born in Souderton, PA, the third of nine children, to the late Paul and Katie (Hunsicker) Yoder. He will always be remembered for his helpfulness, which led him to become a minister, social worker, community organizer, social justice advocate, spiritual guide, and small group leader. An extraordinary listener, he enjoyed hearing people’s stories and helping them reflect on their lives. He loved to laugh with joyful abandon. An avid photographer, croquet player, bicyclist, journal keeper, and memoirist, he delighted his family and friends with scenes from his life growing up in the country. As a child George saw his grandfather butcher a pig and decided he would not be a butcher when he grew up. He got struck by lightning in the root cellar, fell through a hay hole while playing brumsock and got knocked out, trapped a skunk and stunk for a week. He attended a one-room schoolhouse through eighth grade and a three-room school through eleventh. He enjoyed crafting meticulous technical drawings and won an essay contest about why he wanted to be a research chemist, which he would have done if he’d gone to college right away, but WWII intervened. He worked for his father at the Railway Express, an essential service, then served almost three years in the Army, in combat in France and Germany, where he learned that his younger brother Paul had been killed in 1945, soon after the Battle of the Bulge. After he and Vivian married, he told her he thought he wanted to be a minister. She said, “I knew that.” He was grateful for her insights and for introducing him to literature, theater, and music. A tireless advocate for peace and justice, he devoted forty years to Allentown churches, social service agencies, and community groups. While he served as pastor of St. Paul’s UCC (1958-67), he fostered interracial, inter-church Bible studies and actively engaged in community projects through the Allentown Council of Churches (now Lehigh Conference of Churches) promoting fair housing and social services for migrant farmworkers, minorities, and the poor. He directed H.A.R.T. (Hanover Acres Riverview Terrace) Neighborhood Center (1967-68), became a caseworker (1968-71) and then directed Lehigh County Children and Youth Services (1972-83) while serving as supply pastor at Christ UCC Church. He was instrumental in the 1981 merger of Christ UCC with St. John’s UCC, where he then served as assistant to the pastor until 1997. He sponsored spiritual renewal retreats in Penn Northeast Conference of the UCC and was a cofounder and active member of CUNA (Congregations United for Neighborhood Action), advocating for socially conscious urban renewal in Allentown from 1995 to 2008. A lifelong learner and teacher, he exuded warmth and exemplified integrity, compassion, and commitment to helping people. He often said he wanted his epitaph to read: “He was always there when he was needed.” We will hold him forever in our hearts with gratitude and love. Survivors: Children: Rev. Rebecca Stephens, wife of Barry Stephens, of Allentown; Phillip Yoder, husband of Stef Brok, of Birdsboro; Susan Bauer of Moundsville, WV; Barbara Yoder, wife of Edward Connor, of Berkeley, CA. Grand and great-grandchildren: Eric and Jen (Tice) Stephens and daughter Hazel Grace; Emily (Stephens) and Christian Sutter and son Casper; Bhagavan Bauer and Ananga Manjari and sons Nava Kishore and Nitya Navine; Sukadevi Bauer; Narahari Bauer and Cliff Kavara and newborn daughter. Brothers (and spouses) Charles and Louise Yoder and Jim and Ann Yoder, sisters Betty Reiff and Marie Wenner, and many nieces and nephews. A service for immediate family will be arranged by the J. S. Burkholder Funeral Home, www.jsburkholder.com. A celebration of his life will be planned at a later date. In lieu of flowers, memorial gifts may be made to St. John’s UCC, 36 S. 6th Street, Allentown, PA 18101.

Rev. George H. Yoder, 96, of Allentown, PA, died June 1, 2020 in Phoebe Home. Married to the late Vivian H. Yoder for 66 years, he was born in Souderton, PA, the third of nine children, to the late Paul and Katie (Hunsicker) Yoder. He will always... View Obituary & Service Information

The family of Rev. George H. Yoder created this Life Tributes page to make it easy to share your memories.

Send flowers to the Yoder family.