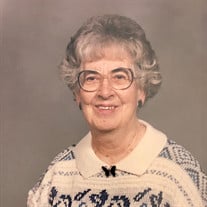 Harriet S. MacDonald, 101, of Allentown, died December 4, 2019 in Luther Crest Retirement Community Memory Care Unit. She was the wife of the late Kenneth F. MacDonald. Harriet was an office worker at the former Western Electric in Allentown. Prior to that, she was a clerk and typist at the Philadelphia Navy Yard. Harriet was a 1939 graduate of the Pennsylvania School for the Deaf and a 1943 graduate of Moravian Seminary for Women. Born December 2, 1918 in Allentown, she was the daughter of the late Harry C. and Edith Mae (Williams) Seebald. She was a lifetime member of the Pennsylvania Society for the Advancement of the Deaf, a member of the Lehigh Association of the Deaf and a member of the former Lehigh Valley Deaf Church. She taught Sign Language throughout her lifetime, helped establish the Lehigh Valley Deaf Senior Citizens Group as well as a past President, and was instrumental in founding the first Telephone Relay Service in the Lehigh Valley with the Red Cross. Harriet was a longtime volunteer at the Good Shepherd Home in Allentown, where she received the Rev. Dr. Conrad Raker Award. She was honored as the oldest living Alumna of the Pennsylvania School for the Deaf upon her 100th Birthday. An avid traveler, Harriet traversed the globe visiting China, Russia, Japan, Australia, New Zealand, Morocco, Canada, Mexico, Europe, many tours of the USA, and countless other adventures. Survivors: Nieces, Nephews, Sister-in-law Suzanne, and cherished friend and caregiver Carole Silvoy. She was preceded in death by her Parents, Husband, Son: Kenneth F. MacDonald, Jr., Brothers: Henry Seebald, Warren Seebald, David Seebald and John Seebald. Services will be private, at the convenience of the family. Memorial Contributions may be made to Luther Crest Benevolent Care Endowment Fund, payable to “LCBC”, 800 Hausman Road, Allentown PA 18104 .

The family of Harriet S. MacDonald created this Life Tributes page to make it easy to share your memories.

Send flowers to the MacDonald family.