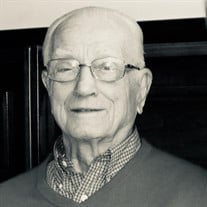 James Edwin Weiss, Jr, 96, of Allentown, died on Sunday at Luther Crest Retirement Community, where he lived for the past seven years. Born and raised in Allentown, he was the son of James and Ida (Babe) Weiss. Jim was a 1941 graduate of Allentown High School. He attended Penn State University for two years, went off to war, and graduated from Lehigh University with a B.S in Business Administration in 1947. He was married for 62 years to Marjorie Flohr Weiss, who died in 2009. He served as Credit Manager for Merritt Lumber Company for thirty years, and was Executive Director of the Allentown-Lehigh County Board of Realtors from 1977 to 1992. A veteran of World War II, Jim served in Italy with the US Army Air Corps. He was quite active in the community, serving as Judge of Elections, as president of the school PTA, and as a bridge instructor with his wife, Marjorie, at the Allentown YMCA for 30 years. He was an excellent bridge player, often bringing home the top prize in his weekly bridge group. He was an ordained elder at the First Presbyterian Church of Allentown, where he was recognized a few years ago as the longest attending member of the church. Jim enjoyed a variety of sports. He played varsity basketball and football in high school. He was a certified basketball and softball official, and enjoyed bowling, golf, and table tennis. When his sons were old enough to play, he picked up tennis again and was very successful competing in club and city tennis tournaments, tormenting his opponents with his drop shots and lobs. Tennis was the family sport, and he particularly enjoyed playing with his three sons. He was a member of Oakmont Tennis Club. He competed regularly in the PA Senior Olympics at Shippensburg, and vied for a number of titles in singles and in doubles with his brother, Ken. Survivors: Jim is survived by his brother, Kenneth, and by his three sons: John, husband of Constance (Herrick) Weiss; Richard, husband of Mary Teresa (Falco) Weiss; and Andrew, husband of Pamela (Marino) Weiss. He is survived by six grandchildren: Eric (and wife Kelly), Emily (and husband Jeremy Houtz); Stephen (and wife Nicole); Andrea (and husband David Glasser); James (and wife Alejandra); and Charles (and wife Olivia). He had 8 great grandchildren: Sander and Selah Houtz, Aaron and Matthew Weiss, Jack and Hannah Glasser, and Camila and Luca Weiss. Service: There will be no calling hours. The family will have a service of remembrance and committal at their convenience. Contributions: In lieu of flowers, contributions may be sent to First Presbyterian Church, 3231 W Tilghman St, Allentown, PA 18104 or to William Allen High School, 106 N. 17th Street, Allentown, PA 18104. Kindly make checks to William Allen High School and write Allen Varsity A in the memo line.

James Edwin Weiss, Jr, 96, of Allentown, died on Sunday at Luther Crest Retirement Community, where he lived for the past seven years. Born and raised in Allentown, he was the son of James and Ida (Babe) Weiss. Jim was a 1941 graduate of Allentown... View Obituary & Service Information

The family of James E. Weiss Jr. created this Life Tributes page to make it easy to share your memories.

Send flowers to the Weiss family.