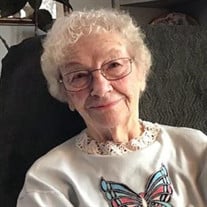 Jeanette Marie Holben, age 97, passed away on May 28, 2021, joining her beloved husband of nearly 77 years, Richard M. Holben, who pre-deceased her on March 22 at age 99. Mrs. Holben is survived by her daughter Nanette M. Holben of Cheltenham, PA, grandson Ben Jones and his wife Tanya Rosen-Jones, and great-grandsons Emerson and Asa Rosen-Jones, all of Oberlin, OH. Known as Jenny to friends and family, Mrs. Holben was born in Allentown on March 8, 1924. She was the daughter of Leon and Helen (Lazar) Choma, both Ukrainian immigrants. Her sister, Ann Ettele, pre-deceased her. Mrs. Holben graduated from Allentown High School in 1941 and studied art at what was then Kutztown State Teachers College. Her talent as an artist was manifest in various volunteer settings, such as co-chairing a project with the Allentown Hospital Junior Aides to decorate the pediatric ward. Mrs. Holben was proud of her Ukrainian heritage, which was especially evident in the ethnic feasts she prepared for Christmas and Easter celebrations. Her particular forte was making and designing pysanky, the traditional Ukrainian Easter eggs. Her descendants cumulatively possess several hundred of her masterpieces. In 1963 Mrs. Holben was recruited to become the Director of Visual Display at H. Leh & Co., formerly an anchor department store in Allentown. With her great sense of fashion, she loved dressing mannequins throughout the store and jokingly referred to herself as “Jenny Holben, D.D.”-meaning “Dummy Dresser.” But her specialty was the store’s front windows, where she could really put her artistry to work. An especially memorable window display was one in which she was asked to highlight the store’s annual sale of towels and linens. She whimsically draped mannequins in gowns and caftans using bedsheets, even adding spectacular pillow case turbans. The only problem was that customers insisted on purchasing the “gowns” on display, and left disappointed after discovering the truth. Mrs. Holben retired in 1987. Later in life, thanks to some coaching from her grandson, who had given her an Apple computer, Mrs. Holben embraced technology and enjoyed designing greeting cards and invitations on her Mac. Well into her 90s she kept in touch with family and friends through email on her iPad and was an avid player of Words with Friends. Following her husband’s retirement in 1989, the Holbens enjoyed travels abroad and also spent several months each winter at Isla del Sol near St. Pete’s Beach in Florida. Summer vacations were inevitably on Long Beach Island, where several generations of their family, down to the fourth generation, still gather every few years. In lieu of a formal ceremony, Mr. and Mrs. Holben’s ashes will be comingled and scattered in the ocean off Long Beach Island during a private family gathering-a plan that Mrs. Holben approved and declared “romantic.”

Jeanette Marie Holben, age 97, passed away on May 28, 2021, joining her beloved husband of nearly 77 years, Richard M. Holben, who pre-deceased her on March 22 at age 99. Mrs. Holben is survived by her daughter Nanette M. Holben of Cheltenham,... View Obituary & Service Information

The family of Jeanette Marie Holben created this Life Tributes page to make it easy to share your memories.

Send flowers to the Holben family.