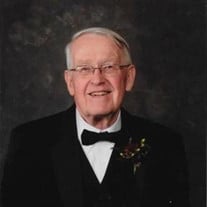 Dr. John Edward Kenvin, 91, of South Whitehall Township, passed away on November 3, 2019. Born March 31, 1928 in Hazleton, PA, he was the son of the late James N. Kenvin and Marie (Curran) Kenvin. Dr. Kenvin graduated from Hazleton High School in 1946. While in high school, he was a part-time employee of the U.S. Postal Service and the U.S. Dept. of Agriculture in the study of the Gypsy Moth infestation of state forests. He received an A.B. Degree in Biology from Lafayette College in Easton, PA, in 1950 and his medical degree from Temple University School of Medicine in 1954 after which he served a one year rotating internship at Sacred Heart Hospital in Allentown, PA. He then became a Medical Officer in the U.S. Navy Medical Corps. and served in the U.S. Marines at Camp Lejeune, N.C. after which he attended the U.S. Navy School of Aviation Medicine in Pensacola, FL. He then served as a Flight Surgeon in Keflavik, Iceland for one year. He completed a residency in pediatrics at the Philadelphia General Hospital and started a pediatric practice with Leon Branton, M.D. in 1959. It was the first group medical practice in the Lehigh Valley at the time. As their practice grew, they added several other physicians to the group and eventually became the Lehigh Valley Pediatric Associates. After retiring from full-time practice in 1988, he continued to assist in the care of children at the Allentown Health Bureau and later at the Pediatric Outpatient Department of the Lehigh Valley Hospital, 17th and Chew Sts, and several other pediatric offices in Allentown and Bethlehem. After this, he served as a school physician with the Allentown School District. He was designated a Fellow of the Academy of Pediatrics in 1962. He was a member of the Lehigh County Medical Society of Pennsylvania, the Pennsylvania Medical Society, and the American Medical Association. While in the practice of Pediatrics, he served on the staffs of the Sacred Heart Hospital in Allentown, the Lehigh Valley Hospital, St. Luke’s Hospital, Muhlenberg Medical Center in Bethlehem and the Quakertown Hospital. He served as Pediatric Consultant for the Pennsylvania State School and Hospital for handicapped children in Hamburg, PA, for several years. He is survived by his wife of 55 years, Monica Magnant Kenvin, M.D., daughters Amy Kenvin of Allentown and Michelle Menzia of Newport Beach, CA, son-in-law, Michael Menzia, grandsons Jack and Stephen Menzia, and granddaughters Caroline and Claire Menzia and nieces and nephews. He was preceded in death by his brother, James R. Kenvin of Levittown, PA. A Mass of Christian Burial will be held on Monday, November 11, 2019 at 11 A.M. at St. Thomas More Catholic Church, 1040 Flexer Ave. Allentown. A calling hour will be held on Monday, November 11, 2019, from 10 A.M. to 11 A.M. in the church. In lieu of flowers, those desiring may make contributions to St. Thomas More Catholic Church 1040 Flexer Ave. Allentown, PA 18103.

The family of John Edward Kenvin, M.D. created this Life Tributes page to make it easy to share your memories.

Send flowers to the Kenvin, family.