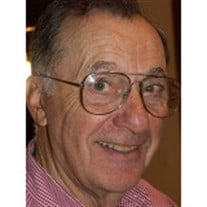 John Richard Marchiando 84, of Allentown, passed away on Thursday, October 18th, at Lehigh Valley Hospital (Cedar Crest). He was born in Greensburg, PA on March 12, 1934 to John Richard Marchiando and Josephine P. (Burzio) Marchiando. Dick, as his friends knew him, grew up in West Haven, CT where he graduated from Notre Dame High School. He graduated with a degree in Industrial Administration from Carnegie Mellon University in Pittsburgh where he met and married Barbara. Later, he received a Master of Business Administration from Lehigh University. He served in the Air National Guard as a fighter pilot and achieved a rank of Captain. Dick began his business career with the Elliott Company in Pittsburgh and joined Air Products and Chemicals in 1962. In 1966, his Air Products career brought him and his family to Allentown and the corporate office where his career grew. He left the company as Director of Business Development for the Chemicals Group in 1980 to become a Board Member and executive of a technology company located in Vienna, Austria. After five years in Europe, Dick returned to Allentown and founded a consulting company. His consulting practice worked with several industrial clients and he held executive and board of director roles for many of them. He and his wife shared a lifelong interest in music and art, and Dick enjoyed his friends and fellow golfers at Saucon Valley Country Club. He is survived by his loving wife of 59 years, Barbara Lynne(Woods) Marchiando, son Keith Richard and wife Dana, and granddaughters Emily Lynne and Leah Marie. A daughter, Lynne Patricia preceded him in death. He is also survived by a sister Patricia and three nieces Shannon, Annie, and Billie-Lynne. Services will be private. Arrangements by the J.S. Burkholder Funeral Home, Allentown. The family wishes to express the most sincere appreciation for the professional and compassionate treatment from those who cared for him at Lehigh Valley Hospital(Cedar Crest). In lieu of flowers, contributions may be made in his memory to either the Allentown Symphony Association or Lehigh Valley Hospital Network.

The family of John Richard Marchiando created this Life Tributes page to make it easy to share your memories.

John Richard Marchiando 84, of Allentown, passed away on Thursday,...

Send flowers to the Marchiando family.