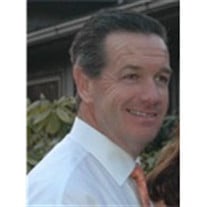 -here is nothing - absolutely nothing - half so much worth doing as messing about in boats.- John S. McGeary III, 57, of Allentown, sailed from this life when he died at home on February 27, 2019. Always a boater at heart, John's gregarious, burly personality, and love for his family and friends was bigger than the ocean. People were drawn to him to hear one of his many stories and jokes, and to share in his hearty, full-body laugh that rumbled through a room. They relished his dry humor, wry smile, and time-tested quips. Even after meeting John for the first time, people walked away feeling they just made a friend for life. John will be profoundly remembered as a loving husband to his wife Annie (Kelly) of 29 years and a proud father to his children John, Brendan and Madelyn. He enjoyed sharing their triumphs in school, on the athletic field, and in their careers, as well as their many antics and adventures. Friends recall John being a -ad- to all their kids by always showing an interest in their activities, cheering their accomplishments and sharing a well-intentioned ribbing. John has been a loyal son, brother, brother-in-law, uncle and son-in-law, as well as a fun-loving friend to all. He was born in Philadelphia, PA, and was the son of the late John S. and Ann (McDevitt) McGeary, Jr. He is a graduate of Cardinal O'Hara High School. John was an active member of St. Thomas More Catholic Church in Allentown. John worked in the flooring and construction industry for more than 30 years. He recently was promoted to a regional position at Mohawk Home. In addition to boating, John enjoyed a good joke, a cold beer, road cycling, skiing, the beach, the mountains, golf at Brookside and Lehigh Country clubs, and gathering with family and friends. He was an avid fan of Emmaus lacrosse and could be found in the stands or on the sidelines watching his kids or others compete. He loved all Philadelphia sports and was ecstatic to celebrate an Eagles' Super Bowl victory. John will be missed. Family and friends draw comfort knowing he was a light that shone brightly in their lives. Survivors: In addition to his wife and children, John is survived by his brother Kevin McGeary (Katie); sisters Veronica McCarty (Mark) and Kathleen LaBricciosa (Sal); Parents-in-law Charles and JoAnn Kelly; brother-in-law Charlie Kelly (Jen); sister-in-law Karen Kuczynski (Chuck) and his favorite 13 nieces and nephews: Maggie, Charles and Erin Kelly; Charlie and Kassia Kuczynski; Elise, Nick and Michelle LaBricciosa; Briana and Colin McCarty; and Kevin, Michaela and Maura McGeary. He was pre-deceased by his brother Brian and a niece Karlee. Services: A Mass of Christian Burial will be held at 10:30 a.m., Thursday, March 7, 2019 at St. Thomas More Catholic Church, 1040 Flexer Ave., Allentown. Calling hours will be held from 4 to 8 p.m., on Wednesday, March 6, 2019 at J.S. Burkholder Funeral Home, 16th & Hamilton Sts., Allentown, and from 9:30-10:30 a.m. on Thursday, March 7 in the church. Contributions: In lieu of flowers, the family ask that contributions be made in John's memory to: Catholic Foundation of Eastern Pennsylvania for the Mercy School for Special Learning General Endowment Fund, P.O. Box 1430, Allentown, PA 18105-1430.

-here is nothing - absolutely nothing - half so much worth doing as messing about in boats.- John S. McGeary III, 57, of Allentown, sailed from this life when he died at home on February 27, 2019. Always a boater at heart, John's gregarious,... View Obituary & Service Information

The family of John S. McGeary III created this Life Tributes page to make it easy to share your memories.

-here is nothing - absolutely nothing - half so much worth doing...