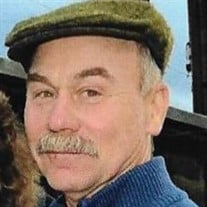 Joseph M. Pietrobon, 72, of South Whitehall Twp., passed away March 24, 2021 at home, surrounded by his family. He was the devoted husband of Prudence (Porobenski) Pietrobon and dedicated father to Marty. Joseph was the parts manager at the former Union Garage in Bethlehem until retiring. Born in Allentown, he was the son of the late Gabriel E. Pietrobon, Jr. and the late Marie T. (Stein) Pietrobon. He was a graduate of Allentown Central Catholic High School and attended Villanova University and Muhlenberg College. Joe served in the U.S. Air Force Reserve and was honorably discharged. From childhood, Joe had a huge interest in trains and over many years accumulated an extensive library of train and trolley books. Joe also enjoyed collecting railroad china. He and Prudy enjoyed various train excursions in Colorado, Nevada, California, Alaska, Oregon, and New Zealand with that trip being the crown jewel. Joe enjoyed traveling and some of his most memorable trips were out West and hiking in the National Parks. Survivors: Wife, Son: Martin J. Pietrobon of Allentown, Brothers: Gregory G. Pietrobon and his wife Stacy of Coopersburg and Robert F. Pietrobon and his wife Patricia of Allentown and Nieces and Nephews. A Mass of Christian Burial will be held on Monday, March 29, 2021 at 11 A.M. in the Cathedral of St. Catharine of Siena 18th and Turner Sts. Allentown. A calling hour will be held on Monday, from 9 A.M. to 10:30 A.M. in the J.S. Burkholder Funeral Home, 16th and Hamilton Sts. Allentown. Social distancing will be observed and face coverings are required. Contributions can be made in Joe’s memory to either: Anthracite Railroads Historical Society, P.O. Box 519, Lansdale, PA 19446 or Nevada Northern Railway, 1100 Avenue “A”, Ely, NV 89301.

Joseph M. Pietrobon, 72, of South Whitehall Twp., passed away March 24, 2021 at home, surrounded by his family. He was the devoted husband of Prudence (Porobenski) Pietrobon and dedicated father to Marty. Joseph was the parts manager at the... View Obituary & Service Information

The family of Joseph M. Pietrobon created this Life Tributes page to make it easy to share your memories.

Send flowers to the Pietrobon family.