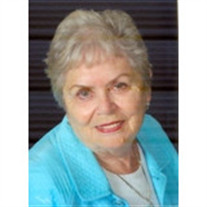 Joyce M. Barry Stenger, 87, formerly of Country Meadows and the Episcopal House both of Allentown died September 6, 2018 in the Phoebe Home, Allentown. She was the widow of Frank C. Barry, Jr. who died August 15, 1978. She was married for a short time to Lawrence A. Stenger who died in 2003. Born in Bethlehem, she was the daughter of the late Wilbur E. and Margaret (Klingaman) Heil. She was a 1948 graduate of Allentown High School. Joyce began her career at Bell Telephone Company as a switch board operator. She went on to work in the same capacity at Lehigh Valley Hospital, the former Allentown Osteopathic Medical Center and Service Supply Plumbing and Heating. She retired in 1992 from Service Electric Cable TV, where she was employed for 10 years. After retirement, she worked part time at the Agri-Plex at the Allentown Fairgrounds. She was a member of St. James United Church of Christ, Allentown and served for over 30 years as a member of the altar guild. She volunteered for many years to work in the kitchen at church. She was a member and exercised at the YWCA, Allentown. She was an avid bowler and enjoyed playing pinochle. Joyce loved her family dearly, treasured the time she spent with them and enjoyed pet sitting for their furry family friends. Survivors: Daughters, Susan J. Davidick of Emmaus and Patricia A. wife of Steven Schmehl of Sinking Spring; brother, Ernest K. Heil and his wife Frances of Kempton; granddaughters, Rebecca wife of Jason Dornblaser, Meghan Cardine, Casey Schmehl; great grandchildren, Chase Dornblaser, Abigail Dornblaser; nieces; nephews. She was pre-deceased by a son-in-law; James J. Davidick and a brother, James A. Heil. A Funeral Service will be held on Tuesday, at 10:30 A.M. in the J.S. Burkholder Funeral Home, 16th & Hamilton Sts., Allentown. Call Tuesday from 9:30 A.M. to 10:30 A.M. in the funeral home, Interment will be held at Woodlawn Memorial Park, Allentown, with a reception to follow the interment. Memorial contributions may be made in Joyce's memory to St. James United Church of Christ, 37 S. 15th St., Allentown, PA 18102 or the Alzheimer's Association 399 Market St. Suite 102, Philadelphia, PA 19106

Joyce M. Barry Stenger, 87, formerly of Country Meadows and the Episcopal House both of Allentown died September 6, 2018 in the Phoebe Home, Allentown. She was the widow of Frank C. Barry, Jr. who died August 15, 1978. She was married for a... View Obituary & Service Information

The family of Joyce M. Stenger created this Life Tributes page to make it easy to share your memories.

Joyce M. Barry Stenger, 87, formerly of Country Meadows and the...

Send flowers to the Stenger family.