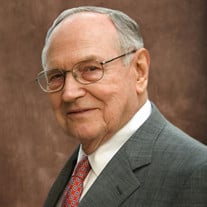 Leon “Lee” Holt died peacefully at the age of 95 on September 13, 2020, while residing at Kirkland Village. He was the devoted husband of the late June Weidner Holt. Leon was born on June 19, 1925 in Reading, PA. He is the son of the late Leon C. Holt and Elizabeth (Bright) Holt, both of Reading, PA. He graduated from Lehigh University in 1948, and received his law degree from University of Pennsylvania Law School in 1951. He worked for Air Products and Chemicals Inc. for 33 years. Lee was in the Navy during WWII. From November 1943 to June 1946, he served as a navigator and radar officer on a troop transport in both the Atlantic and Pacific. He entered Lehigh University in October, 1946, where he was sentinel of Alpha Tau Omega and a member of the Metallurgical Society. He earned his B.S. in materials science and engineering in 1948. Before his senior year in college, he married June W. Holt. In 1951, Leon and June moved to New York City, where Lee practiced law with the Wall Street firm of Mudge, Stern, Williams & Tucker and with American Oil Co. In 1957, he accepted a position at Air Products as an engineer/lawyer, and the couple settled in the Lehigh Valley to raise their family. Rising through the ranks, Lee retired as Vice Chairman and Chief Administrative Officer of Air Products & Chemicals in 1990. He also served as chairman of the Air Products Foundation and a director of the VF Corporation. In 1988, Leon and his family established the Holt Family Foundation to give back to the community. Lee continued to go to the office three days a week until he was 87. While the Foundation was spent down in 2012, he continued to support the local organizations dearest to his heart. Serving also as trustee and chair of The Dorothy Rider Pool Health Care Trust, Leon helped transform the small local Lehigh Valley Hospital into the modern regional Lehigh Valley Health Network that it is today. And after a 40-year plus tenure as a Rider-Pool Foundation trustee, he was assigned the title of Chairman Emeritus. Other community activities included being a member of the board of trustees of the Pennsylvania Chapter of The Nature Conservancy, and of the Allentown Art Museum, for which he served as president from 1988 to 1992. Additionally, the Holts actively supported The Bach Choir of Bethlehem, the Baum School of Art, and the Wildlands Conservancy, among others. Leon was a member of the advisory board of the Institute for Law and Economics at Penn Law School, and served on the board of overseers for nearly a decade. He also served on the board of trustees of the Committee for Economic Development. Lee was passionate about global learning, so he established the Holt Family Endowed International Internship Fund at Lehigh University, as well as an endowment for the Leon C. and June W. Holt Lecture Series in International Law at University of Pennsylvania Law School. Leon was a member of the Episcopal Church of the Mediator, Allentown. He was an avid fly-fisherman and a member of the Upper Tunk Fishing Club, serving as president for many years. He also enjoyed skiing, which he did well into his 70s. Lee loved traveling with his wife and family, and spending summers with his family in the Poconos. Surviving him are two children, Deborah Holt Weil and Richard Weidner Holt; five grandchildren, Michael Holt Weil (Greta Richter), Stephen Holt Weil, James Richard Holt, Emily Nicole Holt, and Olivia Leigh Holt; and two great-grandchildren, Holt Richter Weil and Ryan Hollis Weil. He was predeceased by June W. Holt, his loving wife of 70 years, and a baby granddaughter, Leigh Nicole Holt. He was a devoted family man and constant citizen who will be sorely missed. A private memorial service will be held on Saturday, September 26, at The Episcopal Church of the Mediator in Allentown. In lieu of flowers, contributions may be made in his memory to The Allentown Art Museum, 31 North Fifth Street, Allentown, PA 18101.

The family of Leon Conrad Holt, Jr. created this Life Tributes page to make it easy to share your memories.

Leon “Lee” Holt died peacefully at the age of 95 on September...