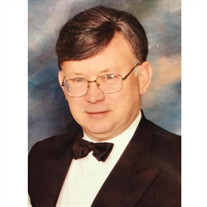 Mr. Louis Richard Barcay, formerly of 3831 Highpoint Drive, Allentown, Pennsylvania. and 72 Village Rd. Pompton Plains, New Jersey, entered into eternal rest Saturday, January 9, 2021. He was the devoted husband of Mary Louise Vice Barcay, loving father, faithful uncle, and cherished granddaddy. He lived in New Jersey until March 1985 when he moved his family to Allentown, Pennsylvania. Born in Newark, New Jersey, he was the son of the late Stephen C Barcay. and Anne C. (Mikulas) Barcay; younger brother to Regina (Barcay) Carney; and uncle to Christopher Carney and Sean Carney. He attended Chatham High School in New Jersey and graduated with a Bachelor of Science in Biology from Tarkio College in Missouri, and then a Master of Science in Biology and Education from Seton Hall University in New Jersey. Leveraging his talent for persuasion, he served as an industrial printing press salesman to several companies based in the New England area (notably, Milton Bradley) through employment with Electro Sprayer Systems, Inc. (then out of Illinois), and Maruka (then out of Japan and New Jersey). After he transitioned away from sales, he had several jobs including driving for J&J Luxury Transportation with frequent service into New York City, all before joining the New York Life Insurance Company as an assistant to his wife and agent representative. Mary and Lou observed their 48th wedding anniversary in July 2020. Introduced to his wife by a mutual friend at a party in Alexandria, Virginia, they were married by Mary’s Uncle George Vick at Fort Belvoir, Virginia on July 8th, 1972. Mary and Lou lived together in complete and utter devotion to each other until Mary’s passing in October 2020. Lou became a father on April 22, 1977 and spent all his time and energy raising his family and supporting the community through their schools, churches, and neighborhoods. He was an active member of Pompton Valley Presbyterian Church and then First Presbyterian Church Allentown, serving in several different member and Deacon roles from community flower delivery coordinator, to Youth Club co-leader, and communion and usher coordinator. He also helped move his in-laws from Huntsville, Alabama to Allentown to care for them for several years before their passing in 1990 and 1991. He was an avid fan of anything his wife enjoyed. She was his pride and joy, searching for her, the love of his life, for 10 years before finding her. As such, he was a Washington Redskins football and UNC Tarheel basketball fan and had very much enjoyed watching the games with his wife. He also loved professional baseball (go, Yankees!) and golf as well as the Olympic games. He also loved music and loved listening to his daughter sing his wife’s favorite artists as well as his own including Frank Sinatra, Neil Diamond, Dean Martin, Marvin Gaye, The Temptations, and Paul Simon. At every opportunity, Lou and Mary would crack and eat Maryland blue crabs and drink beer, even if they could not get down to the Chesapeake area to do so on the beautiful waterfronts. They loved going to Peddler’s Village in New Hope, PA, for Apricot Rooster cocktails and window shopping. It was there that Lou bought everyone in the restaurant a beverage to celebrate learning their second daughter was newly expected. They both enjoyed martini nights, oyster parties, desserts and conversation. Lou was an avid gardener, buying orchids for Mary and tending his Bleeding Heart and rose bushes to have fresh flowers to pick for his wife. Above all, Lou loved his wife, his daughters, and his grandchildren. Every milestone, be it birthday, anniversary or even a hardship… he was there to support his family with his love. He also loved his many pets over the years, particularly his mutt rescued in Pompton Plains, Buffy. He exceled at cooking (and eating the fabulous things he cooked), celebrating occasions, swimming (he was a former lifeguard) and making sure those he worked with felt appreciated and supported. Moreover, he was an avid movie lover, some of his favorites including anything his wife would watch with him as well as James Bond, Alfred Hitchcock, and National Lampoon’s Christmas Vacation. He loved to teach others, whether it was how to catch a fish or how to solve a math problem. He loved to help his neighbors, shoveling their driveways, and mowing their lawns whenever they needed. Lou loved being a parent and playing with his children, building them snow igloos, buying them ice cream treats, and roller skating or riding bicycles together. He taught them how to tie their shoes, how to bake a good pie, and took them on many vacations along the east coast. He loved watching fireworks with them, buying them huge Valentines each year, and dancing together with them. He took them to the zoo, to the amusement park, to the skating rinks, to ballet lessons, to softball and soccer practices, and watched their musical recitals. He loved cheering them on at their school tennis matches, or their many graduations. He loved reminding them how much he loved them when he spoke with them. Lou was absolutely devoted to being a loving husband and father. Lou is a three-time cancer survivor and preceded in death by his parents, his grandparents, his uncle Mickey Mikulas, his brother-in-law Raymond Carney, as well as the love of his live, Mary Louise (Vick) Barcay. Survivors: daughter, Jennifer Elizabeth of Dayton, OH; granddaughters, Madeline Grace and Isabel Faith, and grandson, Charles; two sons-in-law; nephews, Christopher and Sean Carney; a sister, Regina; and another daughter, Christine. Services: Joint private interment with his wife through First Presbyterian Church, Allentown, and J.S. Burkholder Funeral Home, Allentown. In lieu of flowers, please consider making a donation in Lou’s name to the American Diabetes Association, a United States-based nonprofit that seeks to educate the public about diabetes and to help those affected by it through funding research to manage, cure and prevent diabetes. American Diabetes Association 2451 Crystal Dr Ste. 900 Arlington, VA 22202 https://diabetes.org/

The family of Louis Richard Barcay created this Life Tributes page to make it easy to share your memories.

Send flowers to the Barcay family.