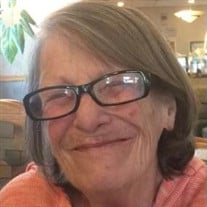 Marilyn F. “Nana” Green, 86, died April 14, 2022 in Gracedale Nursing Home, Nazareth. She was the wife of the late Joseph G. Green, Sr. Marilyn was a bank teller at the former First National Bank in Allentown until retiring. Born in Allentown, she was the daughter of the late Paul and Marie (Devlin) Guth. Marilyn was of the Catholic Faith. She enjoyed many things, such as, riding the LANTA bus, drinking coffee, cigarettes, holiday decorating, old western movies, singing Meatloaf songs, Luna her grand-dog, eating out at buffets and especially her family and friends. Her family would like to extend their heartfelt thanks to the staff at Gracedale for the wonderful care given to Marilyn while she resided there. Survivors: Son: Joseph G. Green, Jr. and his wife Cindy of Allentown, Daughter: Karen M. wife of Edward C. Grabowski of Allentown, Former Daughter-In-Law: Gloria Green of Allentown, Brothers: Paul Guth and his wife Phyllis of Whitehall and Richard Guth and his wife Judy of Allentown, Sister: Mary Jane wife of William Hodge of Tafton, PA, Grandchildren: Amanda C. wife of Frank Amato of Walnutport, Patricia M. wife of Brandon Voight of King of Prussia and Ian Green and his wife Natasha of Garfield, NJ, Great-Grandchildren: Alyssa, Anya, Natalia, Kennedy and Franceska. She was preceded in death by a Grandson: Joseph G. Green III, a Brother: Dennis Guth and Sisters: Barbara Hess and Nancy Guth. A memorial service will be held on Tuesday, April 26, 2022 at 11 A.M. in the J.S. Burkholder Funeral Home, 1601 W. Hamilton Street Allentown. A calling hour will be held on Tuesday, from 10 A.M. to 11 A.M. in the funeral home. Interment: Holy Saviour Cemetery, Bethlehem. In lieu of flowers, contributions may be made in her memory to: Gracedale Nursing Home, 2 Gracedale Ave. Nazareth, PA 18064

The family of Marilyn F. "Nana" Green created this Life Tributes page to make it easy to share your memories.

Send flowers to the Green family.