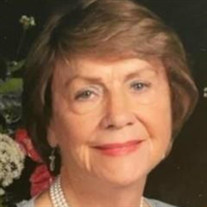 Nora Timlin Buckley of Macungie, PA passed away peacefully on the evening of May 12, 2022 at the age of 85. She was the devoted wife of Eugene Buckley for 63 years and a devoted mother, grandmother of 12 and great-grandmother of 2. Nora came to the United States in 1955 and lived in New York City with her sister Agnes and husband Jim Flannery. She later married in 1959 and had four children, Joan Going of Easton, PA, Betty Trymbiski (Brian) of Doylestown, PA, Eugene (Susan) Ashburn, VA and Marian Pany (Steve) of Allentown, PA. She was preceded in death by her son-in-law Dwight Smith. She was extremely devoted to her family both in the US, Ireland and England. She had over 60 nieces and nephews and they all were so fond of their Aunt Nora Nora's pride and joy were her grandchildren, Brian (Erika), Caitlin, Teddy (Erin), Jennifer (Jon), Patrick (Elise), Caroline (Travis), Sean, Kevin (Erica), Collin, Claire and Evan. Nora was preceded in death by one grandchild David Thomas. She was fortunate to also be a great grandmother to Avery Nora and Mason Dwight. Her third great grandchild is due in September. Born in Co. Mayo, Ireland on July 22, 1936, Nora was the daughter of the late David Timlin and Ann Moran Timlin. She was one of 11 children. She is survived by two brothers, Paddy Timlin (Breege), Muingnabo, Ireland and Michael Timlin (late Linda) Northampton, England and two sisters Nancy Deane (late Tony) of Nottingham, England and Eileen McCormack (late Donald) of Freeport, NY. She was preceded in death by her brothers Martin Timlin, David Timlin (late Agnes) Thrapston, England, TP Timlin (Josephine), Galway, Ireland and Johnny Timlin (Nancy) of Knocknalower, Ireland. She was preceded in death by two sisters, Agnes Flannery (late James) Somers, NY and Mary Atnally (late Edward) Bronxville, NY. Nora was also preceded by six brothers-in-law, Timothy, Jerry (late Dorothy/ Jerry Lee), John (late Elsie), Patrick (late Josephine) Michael (late Marie), William (late Mary) and one sister-in-law Catherine Ceravolo (late Tony). Nora was a volunteer at Doylestown Hospital for over 20 years transporting various patients within the hospital. Her love for gardening was evident as she had the most beautiful flowers and gardens. Nora could sew, knit, cook, paint and her decorating skills were second to none. Whenever any of her children moved to a new home, the first thing was to call Mom to come over and help. The window treatments would be made, the painting and decorating accomplished in a short period of time. She had such an eye for those things. Her Irish Soda Bread, Brown Bread and her children's favorite was her famous Boxty. We would sit around and laugh and eat as many as she would make. Her grandchildren also had the same love for her Boxty. She made her grandchildren's christening gowns and made the most beautiful Irish sweaters for all who would ask. There was nothing that Mom could not do. She was an avid bowler winning many trophies with her competitive spirit. The family would like to thank the caregivers particularly Althea and her family, LV Internal Medicine, LV Hospice and St. Thomas More for all of their loving support. We will all miss her terribly but know that she is in heaven and we will see her again. She is in the loving arms of God. We all learned so much from her and will keep those memories close to our hearts. A Mass of Christian Burial will be held on Wednesday, May 18, 2022 at 11:00 A.M. in St. Thomas More Catholic Church 1040 Flexer Ave. Allentown. A Viewing will be held on Tuesday, May 17, 2022 from 1 P.M. to 3 P.M. and 6 P.M. to 8 P.M. and on Wednesday from 9:30 A.M. to 10:30 A.M. in the J.S. Burkholder Funeral Home 1601 W. Hamilton St. Allentown, PA. Contributions may be made in her memory to: St Thomas More School 1040 Flexer Ave. Allentown, PA 18103.

Nora Timlin Buckley of Macungie, PA passed away peacefully on the evening of May 12, 2022 at the age of 85. She was the devoted wife of Eugene Buckley for 63 years and a devoted mother, grandmother of 12 and great-grandmother of 2. Nora came... View Obituary & Service Information

The family of Nora Timlin Buckley created this Life Tributes page to make it easy to share your memories.

Nora Timlin Buckley of Macungie, PA passed away peacefully on...

Send flowers to the Buckley family.