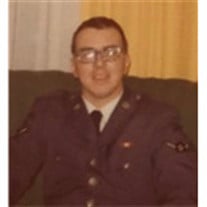 Philip Russell Hayes, aged 67, passed away peacefully on Tuesday morning, November 13, 2018, at Lehigh Valley Muhlenberg Hospital in Bethlehem. He was born March 31, 1951, in the borough of Bronx, New York City, New York, to John (Jack) F. Hayes and Nora (Murray) Hayes, both deceased. The first of four children, Phil moved with his parents to Venezuela at an early age for his father's work. Upon returning to the United States, Phil gained 2 new siblings before moving to Marietta, Ohio for a year, then returning east as his parents settled in Allentown, PA. There, his youngest sibling was born. Phil graduated from William Allen High School, Allentown, PA in 1969. He was drafted into the Unites States Air Force, where he served 4 years, (1970-1973) during the Vietnam War in various capacities, primarily as a support squadron chef. Upon his return to the states, he began a lifetime of employment in the food industry, starting with bread route delivery driver for Sunbeam Bread and SuperValu, Inc. He moved upward to manager of several fast food establishments, including Hardees, KFC and Wendy's. He settled in as head chef at The Ritz Restaurant at the Fairgrounds, Allentown. Phil's meatloaf was to die for. Even the leftovers. In his retirement, Phil moved to Macungie, PA where he worked part time in transportation for special needs students. Phil embraced an easy going, happy-go-lucky attitude in life. Although luck often left his side, that did not diminish his most unique, and beautiful, character trait. Phil would be the neighbor, or friend, or co-worker who would help you when all others would forsake you, deserved or not. No matter how bad your situation, he would be the one to offer his help. At times, it backfired on him, but there are dozens of people who will make it a point to recount how Phil stepped in to help them when no others would, and they are more fortunate today because of his help. Phil had two sons, both born in Allentown, PA. Philip Russell Hayes, Jr., 38, of Franklin, TN, and Shawn Daniel Hayes, 29, of Macungie, PA. His son, Phil (PJ) and his wife, Donna, blessed him with a grandson, Russell, in 2011. Phil is also survived by his sister, Terry Hayes, of Virginia, brother, John (Jack) Hayes of Trooper, PA, and Dan Hayes of Lebanon, PA. A Mass of Christian Burial for Phil Hayes will be held on Monday, November 19, 2018, at 10 AM, in St. Thomas More Catholic Church 1040 Flexer Ave. Allentown, PA. In lieu of flowers, donations can be made to the St. Thomas More Teacher's Fund, which can be accessed online via http://stmschoolpa.com/2018-annual-fund/.

The family of Philip R. Hayes created this Life Tributes page to make it easy to share your memories.

Send flowers to the Hayes family.