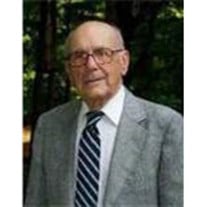 John Kise Stoner, 94, of Allentown passed away on April 16, 2019 at the Luther Crest Health Care Center. He was born in Pottsville on August 29, 1924 to Loose Kise and Bessie Catherine Stoner. John graduated from Pottsville High School. He attended Penn State and graduated from Bob Jones University and Princeton Theological Seminary. While at Bob Jones, he met his wife, Mary Hassenzahl. John enlisted in the United States Army in 1942. During World War II while serving with the 288th Field Artillery Observation Battalion, he was wounded at the Battle of the Bulge, awarded the Purple Heart medal, and honorably discharged in 1946. After the war, John was ordained a Presbyterian minister in 1952. He served Stella Presbyterian Church in Forty Fort, for six years, then, in 1958, moved to Allentown, where he accepted a call to the ministry at First Presbyterian Church. He served there as minister and Pastor Emeritus for thirty years until his retirement in 1988. John was very active in church work throughout the Lehigh Valley area and beyond, serving as moderator of Lehigh Presbytery, President of the Trustees of the Presbytery, Chairman of the Ministerial Relations Committee, Commissioner to General Assemblies of the National Church, and serving on the Synod of the Trinity and its General Council. He fulfilled interim ministries at churches in Easton; Whakatane and Edgecumbe, New Zealand; and Lake Chapala, Mexico. John also served the area as chairman of various organizations, including the Clergy Division of the United Fund of the Lehigh Valley, the Community School of Religion, Council of Trustees at Kutztown University, and Pastoral Care Committee of Allentown-Sacred Heart Hospital Center. He was the director of the Lehigh Council on Alcohol and Drug Abuse, Lehigh County Mental Health and Mental Retardation Board, ARC of Lehigh and Northampton Counties, and the Hispanic American Organization. John was one of a group of ministers who, in 1978, helped establish the Allentown Area Ecumenical Food Bank. Survivors: John is survived by Mary, his wife of 69 years; his daughters, Gayle Stoner and Beverly wife of Jim Baldinger; his son, John husband of Kathy Stoner; 7 grandchildren; 10 great grandchildren; and his sister, Jane Andrews. Service: A Celebration of Life Service will be held at 11:00AM Saturday, May 11, 2019 in the sanctuary at the First Presbyterian Church, 3231 W. Tilghman St., Allentown. Contributions: In lieu of flowers, memorial contributions may be made to Lehigh Valley Hospice, 2024 Lehigh St., Suite 100, Allentown, PA 18103; the ARC of Lehigh and Northampton Counties, Inc., 2289 Avenue A, Bethlehem, PA 18017; or a charity of your choosing.

John Kise Stoner, 94, of Allentown passed away on April 16, 2019 at the Luther Crest Health Care Center. He was born in Pottsville on August 29, 1924 to Loose Kise and Bessie Catherine Stoner. John graduated from Pottsville High School. He attended... View Obituary & Service Information

The family of Rev. John Kise Stoner created this Life Tributes page to make it easy to share your memories.

Send flowers to the Stoner family.