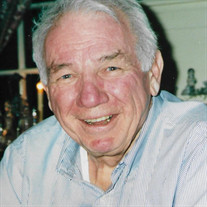 Richard M. Snyder, 91, of Allentown, passed away January 12, 2022 in the Phoebe Home, Allentown. He was the loving husband of the late Virginia M. (Meneghin) Snyder, who passed away May 16, 2021. After retirement, Richard was a lifeguard and taught aquatic classes at Rodale, Muhlenberg College and the Boys and Girls Club. He was the oldest working lifeguard at the age of 80. He was a corporate officer/administrator at Industrial Development Corporation of Lehigh County until retiring. Prior to that, he was the executive director for Allentown Center City Association, was the director of fitness at the Allentown/Bethlehem West End Racquet and Fitness Club, director of community relations at the former Allentown Osteopathic Medical Center and was president of Snyders, Inc., Allentown. Born in Allentown, he was the son of the late Robert N. and Florence M. (Muxworthy) Snyder. He was a graduate of Springfield College in Springfield, MA obtaining his Bachelor of Science in Physical Education and Health Biology. Richard was a First Lieutenant-Intelligence Officer-Platoon Leader in United States Marine Corps serving during the Korean War. He was a commander for the Honorary First Defenders. He was a 32nd Degree Mason Greenleaf Lodge, Jordan Royal Arch Chapter #203, Lehigh Consistory, Valley of Allentown and Grand Lodge of Pennsylvania. Richard served many community service boards such as the Rotary Foundation (where he was a 50 plus year member with perfect attendance), the Good Shepherd Home, YMCA, Salvation Army, Allentown Osteopathic Hospital, Lehigh Valley Swim Officials, Allentown Public Library, AVTS and LCCC, Allentown Recreation Commission and the United Presbyterian Church of the USA. He was a member of the First Presbyterian Church of Allentown. At the church, he served as a Deacon/Elder, served the Lay Missionary Ministry, with his wife Virginia, he started the youth club program and was a mentor of the youth communicant classes. Richard helped start the Barn of the Lehigh Valley.org and was he very well known for giving out Werther’s original candies. Survivors: Daughters: Nan L. wife of Michael Emery of Allentown and Amy R. Gerregano of Allentown, Grandchildren: Erik Emery of Allentown, Peter Gerregano of Allentown and Sara Gerregano of Cordova, TN, Great-Granddaughter: Alexandra, Nieces and Nephews, Honorary Grandkids and the Kids that called him Pop Pop. He was preceded in death by a Sister: Barbara A. Yeager. Services will be at the convenience of the family. In lieu of flowers contributions may be made in his memory to the Youth Program at First Presbyterian Church of Allentown 3231 W. Tilghman St. Allentown, PA 18104.

Richard M. Snyder, 91, of Allentown, passed away January 12, 2022 in the Phoebe Home, Allentown. He was the loving husband of the late Virginia M. (Meneghin) Snyder, who passed away May 16, 2021. After retirement, Richard was a lifeguard and... View Obituary & Service Information

The family of Richard M. Snyder created this Life Tributes page to make it easy to share your memories.

Send flowers to the Snyder family.