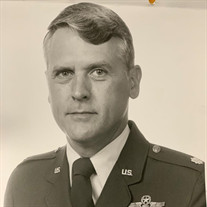 Bob Duerholz passed away on Tuesday, February 22, 2022. He was born on December 18, 1942, in Manhattan, New York City. His parents were Howard and Anna Duerholz. Bob’s childhood days were spent in the Bronx and Queens boroughs of NYC. He graduated from Saint John’s University in Jamaica, Long Island in June 1964. He was married to Joanne R. Novembre in October 1964. He was a career United States Air Force officer retiring in 1985 as a Command Pilot, Lieutenant Colonel. His service to our country included assignments in the Middle East, Turkey: The Far East, South Korea; and six states within the continental USA. He enjoyed collecting stamps, coins, and postcards, playing the electric guitar in three bands; and was active in scuba diving, fishing, boating, skiing, gardening, golf, and traveling. He acquired a master’s degree from Chapman University in Orange, California in 1977. After his military career he worked as a manager for RCA/GE, a Superintendent for a South Jersey home building company and Operations Manager for a SJ Technical Inspection company. He devoted much of his senior years in volunteer work, especially for the Medford men’s HOMER organization. He is survived by his wife of 57 years, Joanne, five children; Christine, Kenneth, Debra, Laura and Chelsea; and seven grandchildren. Services will be private, at the convenience of the family. Condolences may be offered at: www.jsburkholder.com. In lieu of other expressions of sympathy the family requests donations to the Michael J. Fox Parkinson’s Disease Foundation Grand Central Station, P.O. Box 4777 New York, NY 10163-4777

Bob Duerholz passed away on Tuesday, February 22, 2022. He was born on December 18, 1942, in Manhattan, New York City. His parents were Howard and Anna Duerholz. Bob&#8217;s childhood days were spent in the Bronx and Queens boroughs of NYC.... View Obituary & Service Information

The family of Robert J. Duerholz created this Life Tributes page to make it easy to share your memories.

Send flowers to the Duerholz family.