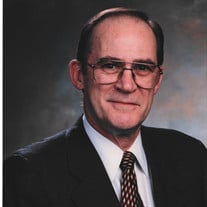 Robert C. Flemming, Sr., 85, of Macungie, formerly of Allentown, passed away on Thursday, January 21, 2021. Born in Camden, NJ, he was the son of the late Dorothy M. (Reynolds) and Francis J. Flemming. He was the beloved husband to Patricia A. (Cerzullo) Flemming for 61 years. He was a graduate of Camden Catholic High School, St. Joseph’s University, and Lehigh University, where he earned his Master’s in Business Administration. He served as an officer in the U.S. Air Force, achieving the rank of Captain before beginning his professional career as a Certified Public Accountant at the firm of Arthur Young in Philadelphia and later, Arthur Anderson. In 1963 he joined Air Products & Chemicals, Inc. in Trexlertown, PA as Controller of its Space & Missile Division. He held several financial management positions in the company including Assistant Corporate Controller, Vice President of Finance of its subsidiary, International Coal Refining, Inc. in Allentown, and Vice President & Corporate Controller of subsidiary, Stearns Catalytic World Corp in Denver, CO. He also served as the President of the APCI Federal Credit Union. In 1987, Bob successfully ran for election to the office of Lehigh County Controller, serving as the citizens’ independent watchdog of their county government for three consecutive terms before retiring in 2000. During his time in office, he was most proud of modernizing the County’s financial operations, reforming its pension program, and overseeing major construction projects including a new prison and government center. Bob was enthusiastically involved in both his home and professional communities, serving in leadership roles at the American Institute of Certified Public Accountants, the Financial Executives Institute, the Lehigh County Retirement Board, The Livingston Club of Allentown, the Serra Club of the Diocese of Allentown, and the Cetronia Ambulance Corporation. He was a founding member of St. Thomas More Catholic Church in Allentown and was involved in numerous committees and initiatives for the parish and the diocese over the previous decades. Bob enjoyed spending time on and around the water. An avid angler, he fished on the numerous lakes and rivers in the region and at his second home in Naples, FL. He found joy in watching his grandchildren grow into adulthood and was able to welcome his third great-grandchild into the world, born just months before his death. He was predeceased by his brother, the Rev. Francis Flemming and his adored grandson, Maxwell S. Casillas. He is survived by his wife, Patricia, sons Robert C., Jr., Daniel J., Kevin F., daughters, Colleen M. Harris, and Sandra L. Casillas, eight grandchildren and three great-grandchildren. A Mass of Christian Burial will be private for the family. The family would like to invite you to view Robert’s Mass on Saturday, January 30, 2021 at 10:30 A.M. on the St. Thomas More Catholic Church Youtube channel https://www.youtube.com/channel/UCfjQszypym6mQ52flx-UG9A Robert's Mass may be viewed on his obituary at: www.jsburkholder.com In lieu of flowers, memorials can be made to the St. Francis Center for Renewal at 395 Bridle Path Rd. Bethlehem, PA 18017 website: stfrancisctr.org.

Robert C. Flemming, Sr., 85, of Macungie, formerly of Allentown, passed away on Thursday, January 21, 2021. Born in Camden, NJ, he was the son of the late Dorothy M. (Reynolds) and Francis J. Flemming. He was the beloved husband to Patricia... View Obituary & Service Information

The family of Robert C. Flemming created this Life Tributes page to make it easy to share your memories.

Send flowers to the Flemming family.