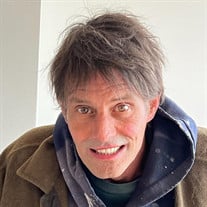 Rolf Oeler, 53, passed away peacefully in his sleep on May 25, 2022. Born in Elmira, New York, he moved with family to Allentown’s West End as a toddler. Though he lived elsewhere in his twenties, Rolf was never at home anywhere but here in Allentown. He found close, lasting friends making his trade as a handyman. At William Allen High School, Rolf was an honors student as well as a champion diver and goalkeeper, earning district honors on the soccer pitch. He also trained at Manchester United in England, and he played for University of Massachusetts (Amherst) and Moravian College. Rolf was proud of his German heritage and after a brief visit to Germany settled on Eisbären Berlin (Berlin Polar Bears) as his favorite sports team. He kept an exhaustive chronicle of the team’s activities, never missed a game that could be seen on the Internet and corresponded with Eisbären fans from around the world. As an amateur sports journalist and historian, Rolf’s best work addressed local teams such as soccer’s Stoners, baseball’s Iron Pigs, and Muhlenberg College football. Possessing an uncommon wit and clever turns of phrase, he wrote as an idealist seeking the highest, truest forms of endeavor-and quick smart when matters failed his standards. He was sometimes irascible but more commonly was exceptionally generous. As with all loyalists he wished the best for friends and countrymen, and like all idealists he never abandoned hopes of better days ahead. Rolf will be missed by all who knew him, especially Joe Clark, Jr. and his other friends at CDC Developers, Clark Cabinets and Stooges, who called him Jimmy. He is survived by his parents, Sally Lorensen (Rogers) Conant, Richard H. (Elaine) Oeler, Malcolm J. (Janet) Gross, his siblings, Kurt (Marcie Hutchins) Oeler, Paula (Dave Tilton) Oeler, Peter M. J. (Jennifer) Gross, Andrea (Steve Herz) Gross, Stacey (Greg Wallingford) Gross and Jack (Sandy Stahl) Gross; nieces Charlie and Margo Gross, along with other nieces and nephews; plus uncles and cousins in Minnesota. He was preceded in death by his grandmother, Margaret Lorensen. A celebration will be held in June at Stooges Bar and Grill at 21st and Liberty Streets in Allentown.

Rolf Oeler, 53, passed away peacefully in his sleep on May 25, 2022. Born in Elmira, New York, he moved with family to Allentown&#8217;s West End as a toddler. Though he lived elsewhere in his twenties, Rolf was never at home anywhere but... View Obituary & Service Information

The family of Rolf Oeler created this Life Tributes page to make it easy to share your memories.

Send flowers to the Oeler family.