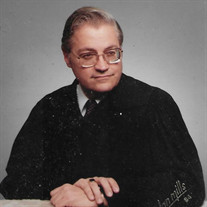 The Honorable Judge John E. Backenstoe The Honorable Judge John E. Backenstoe, 89, formerly of Allentown, passed away June 2, 2022 in Kirkland Village, Bethlehem. He was the husband of the late Lois June (Benner) Backenstoe. Born in Allentown on November 25, 1932, he was the son of the late Dr. Gerald and Harriet (Schwartz) Backenstoe. He attended Emmaus Public School, then graduated in 1950 from the Lawrenceville School, Lawrenceville, NJ, was a 1954 Graduate of Trinity College in Hartford, CT, with his Bachelor of Arts and was a 1957 graduate of the University of Pennsylvania School of Law obtaining his Juris Doctor degree. In 1958, he enlisted in the U.S. Air Force Reserve receiving his basic training at Lackland Air Force Base, San Antonio, Texas. He remained on active duty at New Castile County Air Force Base for a period of six months. In early 1960’s, he received a commission in the Judge Advocate Generals Corps of the U.S. Army as a Captain. Admitted to the Pennsylvania Bar in 1958, he practiced law in Lehigh County for some 13 years. In 1960 he was elected to the Pennsylvania House of Representatives from the city of Allentown. He was the youngest member of the house being elected at the age of 28. He served two terms. In this capacity he sponsored legislation affecting sportsmen, election reform, civil service and was instrumental in passing a lobbyist registration bill. In 1965, Governor William Scranton appointed him a special assistant Attorney General to write legal opinions for the Workmen’s Compensation Board. In 1967, the Pennsylvania Senate confirmed his appointment as a referee in Workmen Compensation cases. In 1971, he was elected a Judge of the Court of Common Pleas of Lehigh County. He was reelected in 1981. In the plebiscite held by the Lehigh County Bar Association on his retention he received a 96% affirmative vote. He had been the Administrative Judge for Juvenile Court activities and during that period mentored a work program for Juveniles, which was one of the first in the state. In 1983, he became President Judge of the Lehigh Court of Common Pleas. Active in the Pennsylvania Association of State Trial Judges he served on its Judicial Ethics Committee for many years. He retired in 1990 but continued as a Senior Judge being assigned by the Supreme Court to hear cases in Northampton, Berks, Bucks, Carbon, Delaware, Chester and Lehigh Counties. He was Chairman of the Lehigh County Young Republicans in 1967. In past years, he was a Board member of the following organizations: Wiley House Home for Children, the Lehigh County Historical Society, the Allentown Young Men’s Christian Association, the Lehigh County Chapter of the American Red Cross, the Lehigh Valley Children’s Association, and the Lehigh Valley Guidance Clinic. He was a division Chairman for the Lehigh County Heart Association. He was a board member and past treasurer of the Emmaus Historical Society. He was a past treasurer of the Western Salisbury PTA. A lifelong member of the Emmaus Moravian Church he served on the Board of Trustees and was President of the Church Council for some 20 years. In 1997, he was the Chairman of the Church’s 250th Anniversary Committee and composed a compendium of “Historic Moments” that were read at the church services throughout the year. He was a member of the Emmaus Rotary Club and served on its Board of Directors. He was for many years President of the Backenstoes Family Association of America. In 2003, he became an active volunteer with Lehigh Valley Hospice. Survivors: Sons: David M. Backenstoe, Esq. and his wife Kelly A. of Center Valley, Gerald J. Backenstoe and his wife Nancy C. of Bethesda, MD and Thomas E. Backenstoe of State College, PA, Grandchildren: Sarah, John Riley, Andrew, Abigail, Madison and Olivia and a Nephew: Timothy Afflerbach and his wife Pat of Emmaus. He was preceded in death by a Sister: Sally Afflerbach. A viewing will be held on Wednesday, from 6 P.M. to 8 P.M. and Thursday, from 9 A.M. to 10 A.M. in the J.S. Burkholder Funeral Home 16th and Hamilton Sts. Allentown. A funeral service will be held on Thursday, at 10 A.M. in the funeral home. Condolences may be offered at: www.jsburkholder.com. In lieu of flowers, contributions may be made in his memory to the American Cancer Society, Lehigh Valley Unit, 3893 Adler Place, Suite 170, Bethlehem, PA 18017.

The family of The Honorable Judge John E. Backenstoe created this Life Tributes page to make it easy to share your memories.

Send flowers to the Backenstoe family.