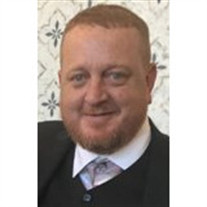 Wade Edward Caverly, 43, of North Catasauqua died Saturday, July 28, 2018 at Hahnemann University Hospital surrounded by family. He was the husband of Robin Ann (Kostecky) Caverly. They would have celebrated their 15th wedding anniversary on November 8th. Born in Priest Lake, ID, he was the son of the late Janet Anne Caverly. Wade attended St. Elizabeth School, and was a 1993 graduate of Catasauqua High School. Along with his sister, Jenny, he owned and operated Sweet & Savory, North Catasauqua. An avid golfer, Wade was a member and President of the Sportsman's Golf League at Willowbrook Golf Club where he proudly shot a hole in one. He was a member of the Catty Cubs and a loyal patron of the Jednota. Wade was a faithful fan of the Philadelphia Eagles, Atlanta Braves and the Villanova Wildcats basketball team and celebrated their victories and felt their losses. Wade never hesitated to help someone. How fitting that upon his death he became an organ donor. Survivors: Beloved Wife, Robin; little sister, Jenny A. wife of Jeff Kindt of Whitehall; father-in-law and mother-in-law, Frank and JoAnn (Fatula)Kostecky of East Allen Township; brother-in-law, Matthew Kostecky of Daytona Beach, FL; Gram, Pauline Fatula of Manville, NJ; cousins, family, many, many friends and he loved his cat, Otis. He was predeceased by his Mother, Janet; Uncle, Brian Foley; and his Maternal Grandparents. Services: Calling hours will be 12pm to 3pm Monday at the Slovak Center Social Club (Jednota), 1233 5th St., Catasauqua, followed by a celebration of Wade's life from 4pm to 7pm Monday. In lieu of flowers please consider a contribution in Wade's memory to the funeral home, 1601 Hamilton St., Allentown, PA 18102.

Wade Edward Caverly, 43, of North Catasauqua died Saturday, July 28, 2018 at Hahnemann University Hospital surrounded by family. He was the husband of Robin Ann (Kostecky) Caverly. They would have celebrated their 15th wedding anniversary on... View Obituary & Service Information

The family of Wade Edward Caverly created this Life Tributes page to make it easy to share your memories.

Send flowers to the Caverly family.