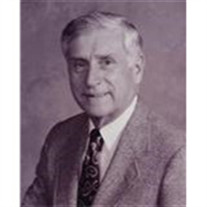 William E. Schantz, Esq., 92, of North Whitehall Twp., died April 9, 2019 in the Phoebe Home, Allentown. He was the loving husband of Patricia V. (Vannatta) Schantz. They were married for 59 years on August 15, 2018. Bill practiced law for over 50 years in Allentown until retiring at age 87. He especially enjoyed practicing law with his son Andrew for over 15 years. Born in Allentown, he was the son of the late Earl V. Schantz, Esq. and the late Irene G. (Gackenbach) Schantz. He was a graduate of Muhlenberg College and Dickinson Law School and was a 50 year member and past president of the Lehigh County Bar Association. He served the U.S. Army Air Forces during WWII. Bill was a lifelong member of Christ Lutheran Church, Allentown. At the church, he was a former usher, lector, pastoral assistant and a member of the church council. He cherished his family and his grandchildren; he had a reputation of great integrity. He was an avid skier and golfer, enjoying those activities well into his 80's. Bill loved skiing with family and friends especially in Stowe, Vermont. He had a love/hate relationship with golf. He was a proud member and past president of Lehigh Country Club, where he loved dining and gathering with friends. Many of his hobbies and pastimes are now enjoyed by his family. While he will be missed greatly, he left a great legacy with many fond memories. Survivors: Wife, Sons: William (Wes) E. Schantz II and his wife Sharon and Andrew V. Schantz, Esq., and Grandchildren: William E. Schantz III, Katherine Schantz, Ava Schantz and Lilianna Schantz. He was preceded in death by a Sister: Marilyn Dickert. Services will be private, at the convenience of the family. In lieu of flowers, memorial donations may be made in his memory to Christ Lutheran Church 1245 W. Hamilton Street Allentown, PA 18102.

William E. Schantz, Esq., 92, of North Whitehall Twp., died April 9, 2019 in the Phoebe Home, Allentown. He was the loving husband of Patricia V. (Vannatta) Schantz. They were married for 59 years on August 15, 2018. Bill practiced law for over... View Obituary & Service Information

The family of William E. Schantz, Esq. created this Life Tributes page to make it easy to share your memories.