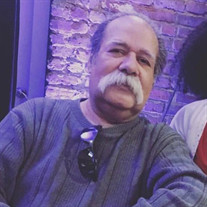 William Rodriguez, 68, of Allentown, passed away December 28, 2021 in St. Luke’s Hospital, Fountain Hill. He was the husband of Maria Teresa Rosario. Born in Brooklyn, New York, he was the son of the late Herminio Rodriguez and the late Gloria Ester Ortiz. He worked as an armored car guard for Wells Fargo Armored Truck Co. and worked for the Department of Corrections in New York City. William held numerous jobs, a cook in a restaurant and was a maintenance worker at various locations. William was a devoted and caring husband, father, grandfather, brother, son, uncle, nephew and friend. He attended high school in Brooklyn, New York, where he met his wife, Teresa. He enjoyed watching T.V., a good movie, the news and debate over them, Teresa’s shows: Casos Cerrado, “Exatlon” and he loved spending time with his grandkids, especially with his “only” grandson William III. He was extremely proud of his son and daughter. He liked watching horse racing, was a devoted Mets fan and playing the lottery every day. His laugh and presence will be greatly missed, he leaves a great legacy behind as it was to always care of others and make sure everyone was taken care of in his small group of family and friends. Survivors: Wife, Son: William Rodriguez and his wife Ismari J., Daughter: Chaliz Rodriguez, Sisters: Herminia Rodriguez and Lourdes Rodriguez, and Grandchildren: Isabel N. Rodriguez, Kaliz T. Cannon, Alani V. Rodriguez, Amalia G. Rodriguez and William Rodriguez III. A Mass of Christian Burial will be held on Thursday, January 6, 2022 at 9 A.M. in Sacred Heart of Jesus Roman Catholic Church 336 N. 4th St. Allentown. A viewing will be held on Wednesday, January 5, 2022 from 2 P.M. to 8 P.M. in the J.S. Burkholder Funeral Home, 1601 W. Hamilton Street Allentown, PA.

William Rodriguez, 68, of Allentown, passed away December 28, 2021 in St. Luke&#8217;s Hospital, Fountain Hill. He was the husband of Maria Teresa Rosario. Born in Brooklyn, New York, he was the son of the late Herminio Rodriguez and the late... View Obituary & Service Information

The family of William Rodriguez created this Life Tributes page to make it easy to share your memories.

Send flowers to the Rodriguez family.